Just got back from the annual CAEP (Canadian Association of Emergency Physicians – eg. ACEP in Canada) conference in Vancouver.  It was an absolute blast, with the highlight being a meet up with some fellow Canadian FOAMites, including Ken Milne of The Skeptics Guide to Emergency Medicine (@TheSGEM).  Ken is a brilliant, hilarious and humble guy, and it was great making a vodcast with him.

Shockingly, Ken works in a rural ED with 5 beds. I say shocking because he does not even have access to many of the resources he discusses on the podcast (eg. a CT scanner).  It is an amazing accomplishment that he is more up to date than many physicians who work in academic centers.  I imagine the power of social media plays a large part in this, as does his dedication to med-ucation.  Ken also gave the most popular talk of the entire conference, a core content EBM talk which had people cheering, sitting in the aisles and lined up outside the door.  Yes, a core content EBM talk was the best of the conference!  Take note CAEP. 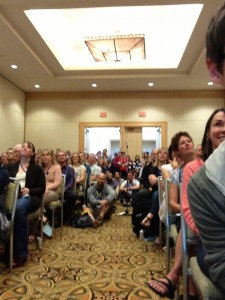 It was also great to meet Stella Yiu and Ed Kwok, two Ottawa EM docs who will be responsible for the education track at CAEP 2014 and are proponents of social media use in health care.  We discussed ways to incorporate more social media into CAEP 2014 and their enthusiasm has me anticipating next year’s CAEP already.  Follow @CAEP2014 on twitter, and tweet Stella (@Stella_Yiu) and Ed (@FrontDoor2HC) your ideas.  Let’s all try to make next year’s CAEP awesome!

Along with myself, Ken, Stella, Brent Thoma (@boringem), Eve Purdy (@purdy_eve) and Elisha Targonsky (@ETube), we made a  a vodcast for The SGEM highlighting great Canadian FOAM.  It is totally ridiculous and should be released next Sunday, I can’t wait to see the final product.

Todd Raine (curator of GoogleFOAM) also came for dinner with us, and it was great to meet him.  Check out his site as a first stop for FOAM resources on any topic.

Finally, a big congrats to Ken and Brent who won the CAEP EM Teacher of the Year and Resident Leadership awards, respectively.  Outstanding!

Over the next few months, the SOCMOB post volume may decrease, as I am finishing residency, buying a house and moving cities.  I’ll still try to get in at least one post per month during this time.