Today is the first installment of a new addition to the site, the Calgary Emergency Medicine Journal Club!

Click here to open the page in full screen width.  It will make the tables much easier to read.

You can check out the Calgary EM Journal Club page here, and this will serve as a resource for residents who couldn’t attend the most recent JC, as well as another FOAM resource to those across the globe.

These will be published once per month, and hopefully we can also get some live Twitter involvement going in the future, much like the TempleEM and St. Emlyns JCs.

Without further ado, here is the November 2013 installment of the Calgary EM JC.

In patients with TIA or minor stroke, should combination anti-platelet therapy with ASA+Clopidogrel be used in favor of ASA alone?

Combination anti-platelet therapy should be considered in patients with TIA/minor stroke, but more evidence is needed for generalization to a North American population. We also felt this should be reserved for patients with rapidly resolving motor symptoms lasting <5min who would otherwise not be admitted, and only pending urgent outpatient neurologic opinion/workup.

The CHANCE (Clopidogrel with Aspirin in Acute Minor Stroke or Transient Ischemic Attack) trial is a multicenter placebo controlled RCT comparing the use of ASA+Clopidogrel with ASA alone after TIA/stroke.

In patients with previous MI or stroke, daily ASA is an excellent therapy, with a NNT = 200 for secondary prevention of stroke.  This study asks if the addition of clopidogrel (Plavix) can improve upon this stroke prevention and if there is an increased bleeding risk with combination therapy.

Overall it was felt that this was an excellent study, with a fantastic NNT of 29 to prevent a stroke at 90 days when comparing A+C with ASA alone.

The key limitation was external validity and the ability to generalize to a North American population was questionable. (See “Are the results clinically applicable” below)  It is also unclear as to why ASA was only used for the first 21 days in the ASA+Clopidogrel arm, with placebo ASA on days 22-90.  It was surmised by the group that this may reduce the bleeding risk of combination therapy, while capturing the benefits of dual anti-platelet therapy in the period of highest risk (immediately post stroke/TIA).

The follow-up period of 90 days was felt to be too short by some, as 1 year follow-up in other studies has shown no difference in stroke rate.  However, those studies did not have as acute an enrolment period (<24 hours) as CHANCE.

Finally, many attendees felt that there was no benefit to starting combination therapy if this would only be stopped by the neurology service a short time later.  Though I can understand their sentiment, previous trials enrolling patients in the sub-acute (1-2 week) period post stroke/TIA showed less or no benefit than CHANCE, and thus I would argue the opposite.  That is, if we are to start dual anti-platelet therapy, it should be done in the ED, as early therapy (<24 hours) has greater potential benefit than delayed initiation of therapy. 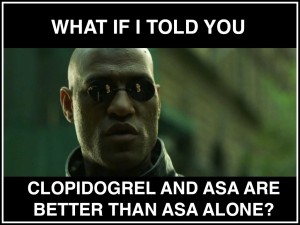 Final Question: Will this change your practice?  Let us know in the comments section.

Thanks for reading.  As this is the first Calgary EM Journal Club post, feedback and comments are greatly appreciated.

Special thanks to Mike Betzner, FRCPC-EM and Ken Milne of TheSGEM.com for their peer-review.