You are here: Home / central line / Why should we insert CVCs?

WHY SHOULD WE INSERT CVCs?

CVCs/CVLs are found in many, if not all critically ill ICU patients.  Why?
To monitor central venous pressure and fluid responsiveness?  To measure markers of perfusion?  To provide fluid resuscitation?

Let’s discuss some common myths surrounding the uses of CVCs.

I would say this list is consistent with the common teaching of today.  While none of these is 100% wrong, there are many problems with indications 1 and 5 on this list.  By the end of this post, hopefully you’ll agree with me that CVCs are primarily for 3 things:
Infusion of irritants, transvenous pacing, and pheresis/HD/CRRT.

There is no dispute that you can measure a CVP using a CVC.  But what is the value of that number in predicting volume status or guiding fluid resuscitation?

You might as well pick a random number out of your head and assign it to your patient’s CVP, as it will be just as useful in guiding your resuscitative efforts.  The best review article on this subject comes from Paul Marik’s Tale of Seven Mares in an issue of Chest, 2008. (All articles cited below)  In this meta-analysis, 24 studies (803 patients) were included, with patients primarily in ICU and OR settings.

3 questions were asked:
1)What is the relationship between CVP and blood volume?
Terrible.  Of the 5 studies that looked at this outcome, the pooled correlation coefficient was 0.16 (95% CI, 0.03 to 0.28)

A picture is worth a thousand words: Predictive value of CVP for volume responsiveness.


A word about the stats: The correlation coefficient (r) is a measurement of the strength and direction of the relationship between two variables, and is measured between 0 and 1. A coefficient of 1 would mean the CVP is perfectly predictive of the blood volume, while a coefficient of 0 means there is no association between the two variables.  Generally, a coefficient of <0.5 means a weak association, while >0.8 is a strong association.
Thus, the ability of CVP to predict volume status/volume responsiveness is beyond poor. As an aside, the article is called the Tale of Seven Mares because the only study that has shown CVP to be predictive of fluid responsiveness was an animal study done in seven standing horses.  So now when you are asked to go hook up that CVP tracing, you can say “I don’t recall seeing a horse in that ICU bed.”  If you’re a staff you can say that, med students and residents might want to be a little more careful.
So what does CVP actually measure?  It measures right atrial pressure.  So you could justify hooking up the CVP probe by saying you wanted to check if the patient had elevated right sided pressures for some reason (eg. PE, RV infarction, TR).  But if you really wanted to do that, slapping on the ultrasound probe and looking at the RV is much faster and less invasive.
How about the central venous O2 saturation?  That’s good isn’t it?
The ScvO2 is a fine measurement, but at least in the case of septic shock, we have a non-inferior, less invasive alternative in the form of lactate clearance.
This comes from a JAMA 2010 article, in which 300 patients with severe sepsis/septic shock (as per the 2001 Rivers Early Goal Directed Therapy (EGDT) criteria) were treated.  One group of 150 patients was resuscitated to the EGDT endpoints for CVP, MAP and ScvO2, while the other group was resuscitated using CVP, MAP and a lactate clearance of 10% in the first 6 hours.  There was no in-hospital mortality difference between groups, and it was concluded that lactate clearance was non-inferior to ScvO2.
Let’s now look at the 5th indication for CVC insertion, fluid resuscitation.
CVC insertion is not a benign procedure, nor is it a rapidly performed procedure, especially in inexperienced hands.  Over a one week period last month, I witnessed four carotid punctures when residents were attempting to insert IJs.
There is now a much safer, faster method for fluid resuscitation. 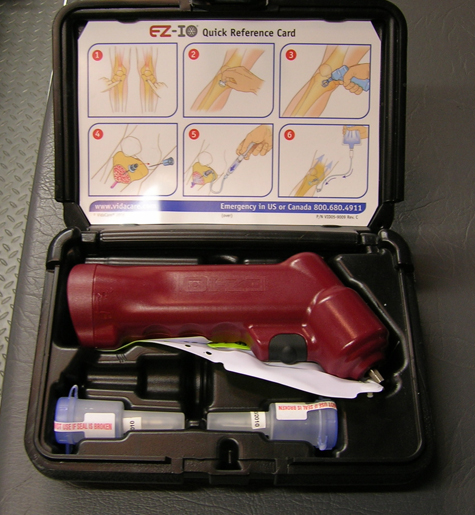 Intraosseous access has traditionally been used more commonly in pediatric populations, but now is making it’s way into adult resuscitative algorithms as well.  It is faster and requires less operator skill than establishing a peripheral iv.  More importantly, when a pressure bag (or blood pressure cuff) is used, the flow rates are just as good as CVCs.


These two tables are from 2 different papers, but are conveniently labeled as Table 2 and Table 3. The first table shows flow rates of standard peripheral and central iv catheters, with and without pressure bags.

The second table shows IO flow rates in sick human patients in Singapore.  You can see the flow rates with a pressure bag compare to a 20 gauge peripheral iv infusion rate, and also compare favorably with CVC infusion rates. In many of these patients, they had both a tibial and humerus IO placed for resuscitation.

NB. The humerus IO generally allows much faster infusion rates than the tibia, despite what this small study shows.

Some pearls regarding IO access:
1)In order to achieve the most rapid infusion volumes with the least patient discomfort, after establishing IO access, give 40 mg of lidocaine (eg. 2 cc of 2%) mixed into a 10 cc NS flush syringe.  Do this before starting your infusion.  In healthy patients, the cardiac effects of this are minimal.
2)Any medication that can be given IV, can be given IO.
3)In an urgent ED situation, IO is your friend.  Use one, use two, you could put in ten before someone established a central line.  Once you have volume resuscitated them somewhat, establish a peripheral IV.
One more CVC related myth = Infectious complication rates
I’ve always been taught that femoral lines are BAD! The groin is dirty, so infectious complication rates must be higher, right? Aren’t DVT rates higher too?

Again we have Paul Marik to thank for this one, as he decided to undertake a meta-analysis looking at these questions.  This study included 2 RCTs and 8 cohort studies and looked at approximately 3200 femorals, 3200 subclavians and just under 11000 IJs.  The total number of catheter days was 113000.
The bottom line from this analysis is that there is no significant difference in catheter related bloodstream infections with any of the three sites.
The analysis also suggests no difference in the rate of DVT, however, this was not an outcome declared at the start of the trial, and there was significant heterogeneity between studies.
My overall take on CVCs
1)CVCs have one MAJOR role: Infusion of irritants – ie: pressors, inotropes, TPN, chemo
They are also needed for transvenous pacers and other therapies in the ICU setting (eg. HD, CRRT)
2)It’s time to take another look at EGDT.  Not only is the CVP an inaccurate measurement, it is a potentially dangerous one.  Attaching a CVP tracing may deter you from giving volume when it is needed, or may stimulate you to give volume when the tank is full and your patient needs vasopressors.
Furthermore, the ScvO2 can be effectively replaced with serial lactate measurements as markers of tissue perfusion.  Lactate going down = good.  Lactate going up = really bad.
3)If you want to put in a femoral line, go ahead.  I’m still going to stick with IJs and subclavians, except in codes/crash lines, but fems are defensible.  In all cases, strict sterile technique.
4)IOs kick ass.  They’re fast, well-tolerated by patients, require limited operator skill, and can provide big volumes of fluid if you put on a pressure bag.  Plus, power tools are fun.
Disclaimer: The Rivers study was a landmark study and monumental achievement.  As with any EBM, it is only a matter of time before we start to assess the individual interventions that comprised EGDT, and see which ones (fluids and antibiotics) were more valuable than others (CVP).