You are here: Home / airway / Digital Intubation, and I Don’t Mean Video

Listening to the May edition of EM:RAP yesterday, there was a segment by Patrick Shipsey on digital intubation.  At first I thought this would be the same old, same old.  That is, someone discussing the pros and cons of video and direct laryngoscopy.  What I didn’t expect to hear was someone talking about using their fingers to intubate someone. No laryngoscope, no glidescope, just two fingers.

I must admit, I knew nothing about this technique, and by the end of Dr. Shipsey’s talk, I was pretty damn curious.  For those of you who don’t have an EM:RAP subscription, here is the link to Dr. Shipsey’s YouTube video demonstrating the technique on a mannequin.

I spent part of today looking up the literature on this topic, and found a few articles of note. “Digital Intubation” (Bluhm and Hardwick, JEM 1984) describes the elegant technique with the following photos.

A picture is worth a thousand words.

In this study, 10 paramedics were trained to digitally intubate (DI) “mongrel dogs and human cadavers” and when deemed adequately trained (no mention of how this was assessed), they were allowed to use the technique in the field under the following conditions:

In the following 20 months, DI was attempted 66 times, and was successful in 59 cases (89%).  They also breakdown the indications and success rate of each of the 10 paramedics in the study; one paramedic successfully intubated 22 of 23 patients by DI with the indication being personal preference 100% of the time.  On average he/she had his fingers in someone else’s mouth > once per month during the study period. I wonder if any colleagues took him aside and asked about his mental health when they saw his positive Russell’s Sign. 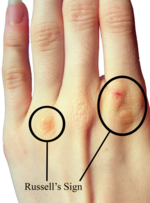 I think of the 5 indications in this study, the 3 bolded ones are probably a little better indications that the inability to visualize and personal preference.  In reality, the risks of being bitten and advancement of airway devices makes indications 3 + 5 weaker.

The next study “Tactile Orotracheal Intubation” (Stewart, Ann Emerg Med 1984) describes the technique again and lists the following as particularly valuable times to use DI:

The article also contains this sentence, “Gloves are advised, although to date most of our field intubations have been performed without them”. Awesome.

After those two articles in 1984, we jump ahead to a 2006 study looking at 18 EM residents and 4 EM attendings performing DI on 6 human cadavers. (Young et al. AJEM 2006)  While they began with 6 cadavers in the study, one developed a false passage near the vocal cords during the study and was excluded from their analysis.  Excluding this cadaver, they report successful intubation 90.9% of the time (CI 85.5%-96.3%) and average time to success or failure as 20.8 seconds (CI, 16.9-24.8).  The average number of intubation attempts was 1.5 per study participant.

Unfortunately, first pass success was only 64.5% and the 90.9% success rate is a cumulative score when up to 3 attempts were made per physician.  The study participants had only a brief explanation of the technique before performing the DI, and as with any technique, practice makes perfect.

I just hope no false passages are created in real life situations. Eek!

Ultimately, here are the pros/cons of the technique as I see it.  However, having never performed this technique, I’d love to hear from those who have.

No requirement for optimal positioning

Ideal for those predicted to be difficult airway (eg. underbite, short neck, obese)

Being bit by patient

Patient must be paralyzed or comatose/dead

Others may think you’re crazy when you jam your fingers in someone’s mouth.

Personally, I find this technique fascinating, and as someone with really long and skinny fingers, I’ll definitely be trying this at our next simulation day.  There are a few failed airway stories I’ve heard in the last six months in which this technique may have saved the day.  Regardless of whether we ever use this technique, it never hurts to have an extra airway trick up your sleeve.

For some reason, this technique reminds me of this Canadian Boston Pizza commercial.  Take note of the fine Vanna White technique, clearly learned while watching my homemade cric trainer video.

Instead of Finger Cooking, imagine “Finger Tubin’ with Chris”

If you have experience with this technique, your comments, criticisms, tips and tricks would be greatly appreciated.

Special thanks to Minh Le Cong (@rfdsdoc) of the PHARM podcast for peer reviewing this post.