You are here: Home / Chris Bond / Propofol for Migraine Part 2 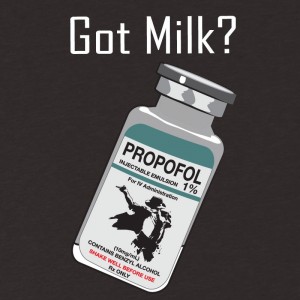 The use of propofol to treat migraine has been previously discussed here at SOCMOB.  Today an interesting paper came to my attention thanks to Reuben Strayer over at EMupdates.

This paper published by Mosier et al. is a four patient case series looking at patients who received 1 mg/kg of propofol over 60 seconds, in contrast to previous papers in which propofol was slowly titrated to achieve pain relief.  One of the major concerns with the approach previously reported was the time and resources necessary to perform a prolonged sedation (up to 60 minutes) during a busy ER shift. This case series addresses that concern, as patients were rousable 5-13 minutes after receiving the propofol.

The authors report shorter ED length of stay and nearly complete resolution of symptoms with this treatment, however there are still a few concerns from my perspective.  This includes but is not limited to:

1)Convenience enrollment based on “failed outpatient therapy” and physician preference, ie: selection bias. However, one of the patients then received compazine and 1 litre of saline prior to the propofol and another had compazine, diphenhydramine, ketorolac and 2 litres of saline after the propofol.

2)They mention a reduced length of stay when compared with other patients presenting with migraine, however, there would almost certainly be some extra special attention and frequency of re-assessment for these patients who were being closely monitored and receiving a relatively novel therapy for migraine.

3)One of their conclusions is that propofol use for migraine may reduce the narcotic dependence that pervades migraine therapy.  As discussed in part 1, I’m not so sure that we want to replace the expectation of narcotics with the expectation of propofol for our migraine patients.  Not exactly a great trade off.

Aside from these limitations and those inherent in a case series, this paper is intriguing in that single dose propofol does have potential for migraine treatment.  It does address the practical concern of avoiding the prolonged sedation and monitoring period documented in previous studies.

I look forward to larger studies using this treatment protocol, as well as further studies on the use of greater occipital nerve and cervical nerve blocks.