You are here: Home / cleaning / Evidence Based Laceration Repair

First, a huge thanks to everyone who has been visiting the site, tweeting and spreading the #FOAMed love.  FOAM is all about word of mouth, and having others spread the word drives me to put up more posts.  Second, if you have comments or suggestions to improve the blog, questions for me, or myths you’d like to see busted, please tweet or email.  I’m always looking for new ideas.

Also, a shout out to a new podcast I’ve found recently.  The SGEM (Skeptics Guide to Emergency Medicine) podcast is based out of Ontario, Canada, and takes a similar approach to topics as I do.  Episode 9 covers some of the wound management myths I’m about to deal with, and a few others I’ve left out.  It can be found on iTunes or on their website http://thesgem.com/

Case: A 25 year old female presents to the ED with a 3 cm laceration to the dorsum of her forearm.  It is superficial, entering only the hypodermis.  It is easily approximated, not over a joint, and under no tension.  Before reading on, mentally go through the steps of how you would manage this wound. (eg. cleaning, prepping, suture material, dressing) Got it?  Read on.

No procedure in medicine contains as many ancient, dogmatic teachings as laceration repair.  Considering this is something we do and teach every day, it’s critical that we have an evidence based approach.

In this post, I will present the thinking that goes through my head as I prepare to close a wound.

The reason behind all of the laceration repair dogma can be summarized in one word, infection.

We’ve all seen someone prepare a simple cut as if it were an open abdomen in the OR.  Why?  Not so long ago, surgeons began using sterile technique in the OR; this was critical for reducing post-op infection rates.  Naturally, that meticulous preparation was then passed down to ED physicians as lore.

But lets think about this for a minute.  There are millions of lacerations every year, and we see a miniscule number of them in the ED.  The rest are managed at home with water, some paper towel and maybe a band-aid.  That’s certainly not sterile technique.  So why aren’t our departments overrun with wound infections from people who cut themselves and didn’t waste 4 green huck towels, a bottle of chlorhexidine, a sterile kidney basin, and countless other tools?  Because clean wounds rarely get infected.

Preparing wounds with sterile technique and meticulous detail is not only unnecessary from an infectious standpoint, it’s time consuming.  As a medical student and resident, laceration repair is great.  It’s fun, you get to work with your hands, sit down, take a mental break.  Overall, as a presenting complaint, laceration is about as good as it gets.  As I get closer to the realm of being a staff physician, I view lacerations differently, in much the same way as I look at insertion of lines and tubes (see previous blogs).  Properly repairing a laceration remains the most important element, but efficiency and managing department flow are also critical.  Furthermore, I don’t want to waste my patient’s time by having them unnecessarily return to the ED for follow-up, suture removal, or complications of the procedure.

1)Wounds must be cleaned with fancy solutions.      NO! 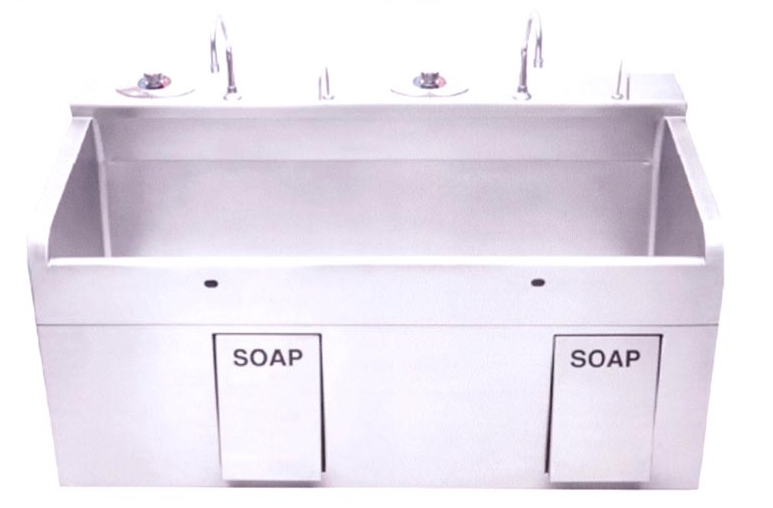 We usually clean lacerations with tap water at home, so why do we need sterile water/saline or chlorhexidine in the ED?

Thankfully, this has been studied.

First, forget antiseptics.  There is little, if any evidence that chlorhexidine or other antiseptics reduce rates of infection.  Conversely, chlorhexidine and povidone-iodine solutions are more likely damage normal cells and slow healing.  These are skin cleansers, for external use only.

So the real choice is between tap water and sterile saline/water.

This Cochrane Review last updated in 2010 included 11 quasi-randomized studies, 3 of which were RCTs.  In adults, tap water is at least as good, if not better, than sterile saline for preventing infectious complications.  In children, there was similarly no difference between tap water and sterile saline.

I think my favorite part of this review is the authors conclusion that there is no evidence that cleansing a wound is better than not cleansing it.  Now that would be a kick ass RCT!  Even if it passed ethics, I think you’d need a used car salesman to consent the patients for the no cleansing group.

This prospective RCT done in 2007 also compared sterile saline with tap water.  Though the study had several problems, one thing it made clear was the cost savings of using tap water in place of sterile saline, a syringe and splash guard would be ~$65.6 million annually in the U.S.  That’s huge!

Disclaimer: If you don’t have a clean tap water source, this likely doesn’t apply, but you could still be using boiled and cooled distilled water in place of the more expensive alternatives.

When I clean a wound in the ED, especially if it’s an upper extremitiy, I will anesthetize, walk the patient over to the sink, and wash their hand under running water for a few minutes. The volume difference is huge, and it takes virtually no time at all.

Bottom line: Tap water is just as good, if not better than sterile saline for irrigating simple wounds in the ED.

After I’ve cleaned my patient’s hand in tap water, should I grab some sterile gloves to sew them up?  Maybe the patients love to see me snap on those fancy gloves that come from their own, individually sealed bag.

Bottom Line: Clean gloves are just fine.
The best data on this comes from a 2004 study by Perelman et al. in Annals of EM.  This Canadian study was a prospective RCT, and looked at 816 patients over the age of 1 year with simple lacerations.  They found the infection rate for sterile vs non-sterile gloves was 6.1% and 4.4%, respectively with no significant statistical difference.

Again, the cost difference between using sterile and non-sterile gloves is massive when we consider how often they are used on a daily basis.

I will admit that in cases that require a significant amount of suturing or I want an optimal cosmetic result, (eg. facial lacs) I will use sterile gloves because they provide a much better feel than the non-sterile ones.  Go ahead and call me a hypocrite.

3)All lacerations must be sutured using non-absorbable suture.

First, there is evidence that not all lacerations < 2 cm even require suturing in the first place.  But let’s say that we do decide to close this laceration, how will we do it?

Has anyone heard this: Don’t use absorbable sutures or glue, they’ll get a nasty scar!

Let’s look at the evidence.

First let’s take the scenario of the 3 year old child with a non-gaping facial laceration after running into a coffee table.  I’m sure many of us have gone through the joy of anesthetizing this child and suturing them while a nurse holds them in a death grip.  All the while, the parents are looking on horrified and never wanting to return to the hospital.

While rotating through the Alberta Children’s Hospital (AKA Lego-land with an ICU), I was exposed to all the awesome ways of repairing lacs in kids.  The children would have topical maxilene or lidocaine applied at triage and we would sometimes give intranasal midazolam as well.  Suffice it to say, this place is pretty much heaven as far as peds EM is concerned, and laceration repair was all happiness and roses.  Unfortunately, most of our EDs do not have these luxuries, but we do have one awesome thing.  Glue!

But what about gaping lacerations where glue won’t work?

Traditionally we are taught to always use non-absorbable sutures, as they are stronger, less prone to infection, etc.  Having been sutured up several times as a child, I recall fearing the return visit for suture removal even more than the initial visit to get sewn up.  When a child is bleeding everywhere, the pain is bearable, but pulling out the scissors and forceps in front of a completely well child creates unnecessary fear.

Can we avoid this return visit without compromising cosmesis?  Yes.

This 2004 paper by Karounis et al. looked at pediatric patients (0 to 18 years) with traumatic lacerations.  It showed no differences in early or late cosmesis, wound dehiscence or need for scar revision when comparing absorbable and non-absorbable suture.  In fact, all of the outcomes showed a trend toward benefit in the absorbable suture group.  (I know, trends don’t mean squat in EBM)
The main weakness of this study was the extremely high loss to follow-up of 34%.  However, this is a very common weakness of laceration repair studies, and getting good follow-up in these types of studies seems impossible.

Another study from 2008 looked at fast absorbing catgut suture vs. nylon in 88 pediatric patients.  Again there were no differences in cosmesis, infection rate, dehiscence, keloid formation or parental satisfaction.  This paper also suffered from a lack of follow-up (though it was equal in both groups).

Bottom Line: For non-gaping lacerations, glue is where it’s at.  For gaping lacerations in children, absorbable suture is at least as good as non-absorbable.
The savings on patient/parental trauma and time are huge.

Note: Although I didn’t cover staples, they are likely as good as sutures for repairing scalp lacerations.  There are small studies comparing them, but no large RCTs.

4)After closing the wound you should apply a topical antibiotic such as polysporin/neosporin.

2018 Update: Thanks to reader JD, this was researched more and there is a recent systematic review and meta-analysis from this year (Tong 2018) that indicates there is likely a small but measurable benefit to use of topical antibiotic ointment. They do conclude that it should be balanced against the downsides of increasing antibiotic resistance, which is well documented. However, a measurable benefit still remains.

The previous comments came from a study of petrolatum vs. topical antibiotics in dermatologic surgery (Smack 1996), obviously something I picked up from derm that is not the same patient population as the ED. In this RCT of bacitracin vs. petrolatum, there was no difference in infection rate, but there was more contact dermatitis in the antibiotic group.

Thanks JD for the question.

1)Tap water is as good as sterile saline

3)Glue and absorbable sutures provide the same cosmetic results as non-absorbable ones, particularly for facial lacerations.

4)Topical antibiotics post wound repair decrease infectious risk; though there is a risk of contact dermatitis and it does contribute to increasing antibiotic resistance.

You now have all the evidence you need to manage simple lacerations in 5-10 minutes, without putting your patients at increased risk of infection, giving them an ugly scar.

Until next time, I’ll be getting up in people’s faces, not minding my own business.  I’m way less likely to get stabbed that way.