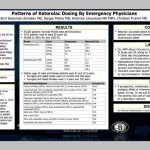 Sergey Motov (@smotovmd) sparked an interesting Twitter debate last month with his poster that looked at ketorolac (Toradol) dosing in the ED. I have previously written about ketorolac in NSAIDs parts one, two and three. Elisha Targonsky (@ETube) commented that the equi-analgesic and less GI toxic 10 mg ketorolac dose is standard in his ED.  […]

Hi all, Short post today, as I just want to acknowledge the great work of another blog over at EMLyceum. The myths of hyperkalemia management are many.  While I have discussed the uselessness of kayexalate in my introductory post, I was thinking about discussing ECG changes and the “textbook progression” so often cited with peaked […]

–> I love NSAIDs!  Yup, love ‘em! NSAIDs (Non-steroidal anti-inflammatory drugs) are some of the best analgesics available, plus they’re generally over the counter.  Despite their daily use for decades, NSAIDs remain sorely misunderstood.  I know they’re not a panacea, and they have some serious side effects in certain populations.   But for healthy patients without […]

If there’s one area of medicine that suffers from more dogma than any other, it’s toxicology.   I’m not razzing tox, I love tox.  But management in toxicology usually = throw kitchen sink at patient, followed by a case report that concludes the last intervention done just prior to the patient improving is a new treatment […]

Hi all, sorry about the extended hiatus.  I was away after Christmas for about 12 days and have been getting back in the swing of things over the past week.  Since the break, one great new blog that has popped up on the FOAMed landscape is the boringem blog, started by Brent Thoma, one of […]